I present to you the Ahool, a mysterious cryptid of the jungle. Part bat, part ape and all predator. 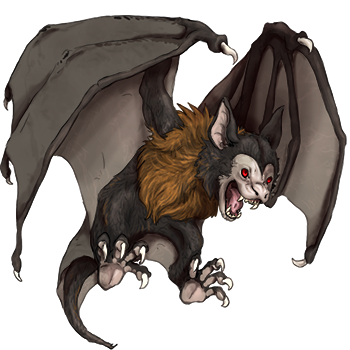 This lovely picture is by Haley Dubay.


Ahool females usually form units, so that they may share the rearing of young. Upon reaching adulthood, females will typically continue on with the troop, while males go off to establish their own territory.
Posted by Unknown at 8:59 PM 4 comments:

Last weekend was Marscon 2015, in sunny Bloomington, MN. It was relocated to the Hilton near the Mall of America. All in all, a good time. Unfortunately, I had a somewhat disorganized weekend, so I probably didn't take full advantage of what the con had to offer.

First off, the hotel. The Hilton was a new location for Marscon. A pretty nice hotel, but the parking lot was a bit too small. The Hilton did have some overflow parking down the hill that it shares with, I think, the Park Plaza. Two issues with this: 1. there is nothing to indicate that this is overflow parking, and 2. as you may or may not know, some con goers can't handle hills as well as others. But, the hotel was pretty nice otherwise, and easy to get around. The staff seemed decent as well. Some people complained about the heat in their rooms, but I didn't have an issue with that.

Second, the programming. Marscon had a nice spread of programming, and it's upped its game with educational programming and things for the youngsters. There appears to have been some last minute chaos, though. I found out Wednesday night that the con had decided to use two of my panel ideas and that I was on both panels to act as moderator. Both went okay, but only one other person was on one panel with me, and I was the only person on the other panel.

I wish I'd hit the movie room. It appears to have had a good selection of movies and people seemed happy with it. And as always, there was karaoke. And room parties. A fair number of room parties that ranged in quality from 'meh' to pretty darn cool.

I think the con staff did a pretty good job overall. There was one incident with a security volunteer, but I won't go into the specifics because it would just be hearsay and it seems to have been dealt with appropriately. The consuite staff in particular did a great job.

All in all, a pretty good con. It was perhaps a little disorganized, but this was a new hotel and I expect things will run more smoothly next year.
Posted by Unknown at 7:42 PM No comments: