As most of you probably aren't aware, the hodag is a cryptid from the USA, specifically the state of Wisconsin. It's pretty well accepted that it was a hoax, but its influence lives on. There is actually a hodag festival.

I'm not sure that I'm entirely happy with what I came up with for the hodag, but I'm not finding any inspiration, so here it is. 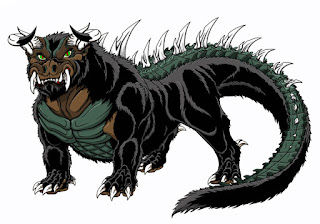 This lovely picture is by Frank Parr. Used with permission.

Charge. If the hodag moves at least 20 feet straight towards a target and then hits it with a gore attack on the same turn, the target takes an extra 10 (2d10) damage. If the target is a creature, it must succeed on a DC 14 Strength saving throw or be knocked prone.

The hodag is a solitary and territorial predator that inhabits temperate woods. It is a large, thick-bodied lizard-like creature with short legs that end with clawed feet. The hodag’s body is covered with dark green fur, its mouth has large, vicious fangs and a pair of forward sweeping horns grows from the top of it head. Spikes grow from its back along its spine, sprouting from its nape to the end of its tail.
Despite its somewhat ungainly appearance, the hodag is surprisingly stealthy. It is also a proficient climber, able to use its claws to aid in its efforts. The hodag is also a very robust creature, seemingly more resistant to such things as poisons if only through sheer stubbornness.

Lone Hunters
Hodags live alone in wild, wooded places, claiming a large hunting territory. They will only tolerate another member of their species when it is time to mate, with the pair immediately going their separate ways once it is done. At any other time, two hodags who cross each other’s paths will battle until one is finally forced to flee.

Fearless Predators
Hodags are vicious predators, and they fear very little. They will eat just about anything they can kill, though they seem to have a peculiar fondness for dog flesh. They will only hesitate to attack something that is obviously significantly more powerful than they are.


Hodags despise the scent of lemons. While not harmful to them, they will generally avoid an area that smells of the fruit. Travelers who know they are passing through a hodag’s territory will typically make sure they have some of the fruit with them to ward off the beast. If the traveler is lucky, it will actually work.
Posted by Unknown at 6:33 PM No comments: