My very own 5e race: The Treeling

Someone was talking about his girlfriend wanting to play a plant race in his 5e game. So it caused a bit of random inspiration and this is the result, slightly modified based on feedback from reddit. 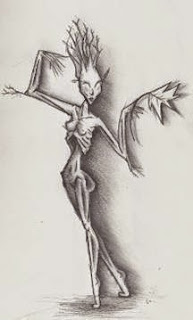 Picture copyright of izabeaubo over on Deviant Art.

Treelings are beings of the forest, who appear to be small trees that have grown into the semblance of the human form. They delight in nature, but also in music and artistry. When provoked, they can also be tireless defenders of their forest home, and implacable enemies.

Slender But Sturdy
Treelings stand anywhere from 6 to 7 feet in height. Though slender, they are quite sturdy, with their bark-like hide giving them additional protection against possible injury. Despite their slender build, treelings can be quite heavy, ranging in weight from 200 to 250 pounds.
They have clearly identifiable features, with black eyes and slender branches growing from their heads in the resemblance of hair. Their features are typically serene, projecting a sense of patience and tranquility.

Timeless Tranquility
Treelings live as long as elves, and have some similar views on things as a result. They rarely get excited or rush to action. They take their time deciding on matters of importance. They value peace, and will frequently simply withdraw from an aggressor, confident that they will outlive the invader. They can be provoked, however, and when they are moved to war, their fury can be devastating.

Woodland Realms
Treelings live deep in the forest, rarely having a need to venture forth from their homes. They don’t have the same need for housing as other races, and what structures they do create are grown from trees carefully cultivated into the forms they desire.
They get on well with elves as well as the fairies of the forest. They appreciate what the arcane can do, but tend to favor nature magic. While they do have a small need for food, they are very selective and careful in their cultivation of the bounty of their homes.

Adventuring
Most treelings are content to remain in their forested domain. Some, however, do experience wanderlust and a desire to see new places and things. Sometimes a lone treeling is an orphan seeking out more of its kind.
Treelings rarely feel strongly about any particular moral cause, though the obviously destructive can drive them into opposition. They don’t particularly value money, and when adventuring, they are more likely to choose items for their beauty or utility over their monetary value.

Treeling Names
Treelings don’t seem to feel the need for names when they are interacting with each other. As a result, they tend to be known to members of other races by nicknames. There seems to be little difference in the nicknames used by male and female treelings, and in fact, it can be difficult to determine if a particular treeling is male or female.

Age. Treelings age at a rate similar to elves, reaching maturity at about 100 years and living to 750 years or possibly more.

Alignment. Though tending towards benevolent rather than malevolent, Treelings do not usually think of terms of good and evil, law and chaos. As a result, Treelings are most often neutral in alignment. Their ideas of morality are typically shaped by a very practical viewpoint.

Size. Treelings range in height from 6 to 7 feet. Your size is Medium.

Speed. Your base walking speed is 30 ft.

Natural Armor. Due to their bark-like skin, Treelings have a +1 bonus to Armor Class.

Photosynthesis. Treelings are able to use photosynthesis to meet some of their sustenance needs. As a result, Treelings do not need to eat food provided they have access to sunlight for at least an hour every day, two hours in overcast conditions. However, they require twice as much water as other races.

Berries. If your water needs are met, then you may cast Goodberry once per day.

Forest Camouflage. You have advantage on Dexterity (Stealth) checks in forested terrain.

Tree Shape. Once per day, you may take the shape of a medium sized tree for an unlimited duration. While in tree form, even the closest inspection will not reveal you are anything other than a sapling. You are able to observe you surroundings as normal, your base armor class becomes 16, but your speed drops to 0 and attacks have advantage against you. Any items you wear or carry merge with your form when you change and do not function while merged.

Taking Root. Treelings must spend 24 hours per month in tree form so that their roots may take up nutrients from the soil. These hours do not need to be consecutive, but must be in hourly increments.

Languages. You can speak, read and write Common and Sylvan.