I believe that Ukobach was originally a proper name for a specific demon, detailed in Dictionnaire Infernal back in 1818, written by Jacques Collin de Plancy. I've decided to make it into an entire race (if that is the right word) of devils that exist at the bottom of the totem pole in the Nine Hells.

This is the picture of Ukobach from Dictionnaire Infernal.

I kind of prefer this look, created by monkeynohito over on Deviant Art. Actually a mix of a kobold & Ukobach, but I still like the look. 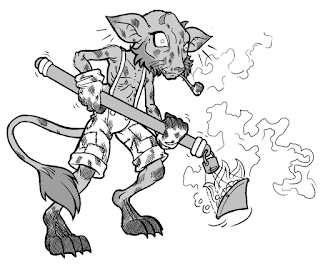 Anyway, on to the stats:

Magic Resistance The devil has advantage on saving throws against spells and other magical effects.

Hurl Flame. Ranged Spell Attack: +4 to hit, range 150 ft., one target. Hit: 7 (2d6) fire damage. If the target is a flammable object that isn’t being worn or carried, it also catches fire.

These diminutive, red-skinned creatures are one of the lesser kinds of devils that reside in the Nine Hells. According to legend, the Ukobach are charged with tending the boilers of Hell, using oil made with the blood of the damned. They have spindly limbs, a slightly hunched posture, and almost comically large eyes, nose and ears. The only clothing they wear is an apron made from various sorts of leather, and they always carry a long-handled coal pan that constantly burns with hellfire. The Ukobach are able to deftly use these pans as weapons, heedless of the collateral damage the hellfire may cause. This hellfire is a product of the Ukobach’s magic, not the coal pan itself.

Pyromaniacs. The Ukobach love setting things on fire. The bigger the flame, the more they like it. They also aren’t overly picky about what they set aflame, taking a sadistic glee throwing their hellfire at random creatures. Fortunately, as they are only rarely summoned from their infernal home, they do not often have opportunities to indulge in this particular pastime.

Superlative Chefs. Ukobach love to cook and they can be quite skilled at it. Of course, what an Ukobach considers acceptable to cook can be quite different from what a mortal may find appropriate. It is possible to appease an Ukobach with an interesting recipe that it hasn’t seen before, and it is less likely to resent summoning if it has the opportunity to indulge in this pastime. The denizens of Hell typically don’t need to eat, so the Ukobach rarely have an appreciative audience to showcase their skills to. On some worlds, legend has it that it was an Ukobach who invented the art of deep frying foods.
Posted by Unknown at 10:52 PM